The Most Destructive Termite in Brisbane

Coptotermes acinaciformis Termite Species is the most destructive termite in Brisbane

Within the pest control industry among other termite technicians, this species is known as Coptos.

Coptotermes spp belong to the family Rhinotermitidae and there are several different species, but the one most encountered in homes; throughout Australia by pest controllers is Coptotermes acinaciformis.

This is the most destructive termite in Australia, because of its distribution and causes many thousands of dollars’ worth of damage to homes here in Brisbane and the rest of Australia.

Let’s just clarify it as being the most destructive termite in Australia, in actual fact the giant termite Mastotermes darwiniensis is actually the most destructive, but it’s only found north of the tropic of Capricorn, so C. acinaciformis does more actual damage because it’s found all over Australia

C.acinaciformis soldiers are about 5.8mm long; their nest can be over 50 meters away from the home that they attack.

The worker termites are constantly exploring the surrounding territory for new food sources, this means your home, and it goes on 365 days of the year their sole purpose is the survival of the colony

C.acinaciformis will normally need contact with the ground to survive, but they can also survive in certain situations without ground contact provided there is a constant water source.

Coptotermes acinaciformis (Most destructive termite in Australia, because of its wide distribution it’s found all over Australia)

Coptotermes frenchi (Mainly a forest pest, but it can attack houses mostly in southern states, but not as destructive as C. acinaciformis.

Coptotermes lacteus (Attacks timber in contact with the ground such as posts and poles, it doesn’t attack buildings)

Coptotermes michaelseni (It doesn’t attack buildings it feeds in a similar way to C. lacteus)

Coptotermes raffrayi ( Found in south-western Australia and it does attack houses there, but only consist of a small colony, so it doesn’t have the destructive power like that of C. acinaciformis, the control of this species is  to simply destroy the small mound nest it builds)

Tips To Keep Termites Out Of Your Home:

The best thing as with all termites is to keep the outside of the property clear of debris especially up against the walls of a house.

Don’t EVER stack wood up against the walls of a house and leave it there for any length of time, this will certainly be an easy target for this species of termite and any other termite species for that matter.

Always make sure the weep-holes around the home are clear and free from debris, this not only allows air-flow between the inside and outside wall cavity, but it also gives a good clear view of the weep-holes when having a Brisbane termite inspection done.

Weep-holes are an easy access point for subterranean termites to gain entry to a home.

Fix any leaking water taps and drain pipes around the home, leaks of this kind will make the footing of the house wet and damp, a perfect place for termites to come seeking a moisture source.

Hot water systems and air-conditioning unit have a drain pipe on them to release excess water, this pipe must be diverted away from the edge of the property, it can easily be plumbed into a downpipe to take the water away.

Don’t forget termites always start from the outside, so don’t make it easy for them, the less inviting a home is the better chances you have of keeping them out.

The most important thing a homeowner can do to help keep termites out of their home is to have an annual termite inspection done by a qualified termite specialist.

This species can be controlled with either a chemical soil barrier treatment or a baiting and monitoring system, Click here (termite treatments) for more information.

Coptotermes ssp generally don’t build mound nests except when found further north and even then not always. As mentioned earlier they mainly build their nests in tree stumps, living trees, under patios and of course in the walls of a house.

A nest can contain half a million to a million termites and that’s in a single colony, this is why they can be so destructive to a home. 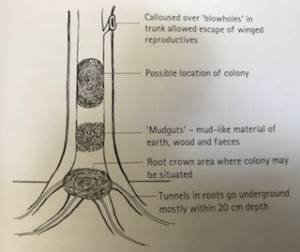 Showing location of termite nest in a tree

To identify a termite species properly the technician will need to see the soldier, Coptotermes acinaciformis soldiers have a pear-shaped head and they also exude a white material out of a small pore in their head.  See Picture Below. 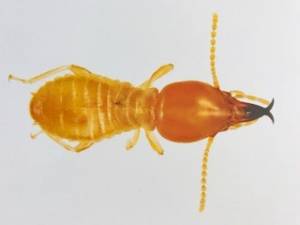 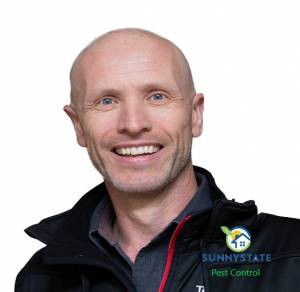 Jason Neale is the owner of Sunnystate we are a professional Pest Control and Termite company servicing customers throughout Brisbane – Ipswich – Gold Coast and have been in the industry for over 20 years and is also a keen blogger.