The cockroach is a very versatile insect they belong to the Order Blattodea. They are extremely successful in their survival and breeding habits.

Cockroaches have been around for some 300 million years and I’d say they are here to stay.

They have survived everything that Mother Nature has to throw at them and they seem to get stronger.

Fossils found over the years show that their general body structure hasn’t changed in the last 300 million years. That is a testament to just how successful a species they really are.

Cockroaches can live and survive just about anywhere, and they harbour in a wide range of places. Apart from taking refuse in buildings that we work and live in they are also known to thrive in the bark of trees, decaying leaf matter, caves, burrows and shrubs.

There’s nowhere safe from the dreaded cockroach, but they are all around us all of the time, we just can’t see them.

The estimated different species of cockroach is said to be about 3500 worldwide. But only around 10 of those species cause serious concern to the dwellings of humans.

Cockroaches are one of the most successful scavengers in the insect world and they love human food.

Amongst many pests controllers these days the cockroach is commonly known as “cockies”. 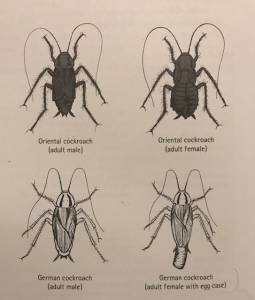 An adult cockroach has a medium to a large body they have an oval shape look about them. Because of their flattened body shape they can make great use of tight areas and cracks and crevices.

Also because of the way they can crawl into hard to reach places it makes them very hard to see. If cockroaches go unnoticed for too long inside a dwelling it can turn into an infestation very quickly.

Cockroaches have long Antennae on the front of their head they are generally threaded like to look at.

Their legs have a line of protective spikes and these are also used for crawling and scurrying on a variety of different surfaces.

They have what is known as compound eyes and they are generally well developed. Cockroaches have primitive mouthparts that allow them to chew. Because of their mouthparts, they can feed on a variety of different foods types.

Some cockroaches may have wings but sometimes they can be reduced slightly or even completely absent. The development of the wings will largely depend on the species of cockroach.

The species that have developed full wings the forewing is narrower and looks leathery these are called (tegminal).

They cover the more membranous hind wings giving them plenty of protection.

Nymphs which are basically the baby stage in the development of cockroaches are similar to the adults in shape.

The differences from the adults to the Nymphs are the wings, genitalia and the body colouring in some species. 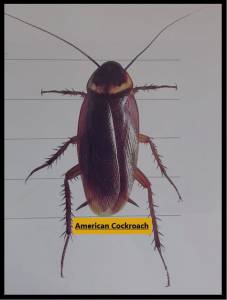 Would you believe cockroaches reproduce sexually the female will leave a secretion with an attractant pheromone in?

The male cockroaches have what is called (chemoreceptors) on their Antennae. They also have a courtship procedure and then end to end copulation.

Cockroach eggs are encased in a purse-shaped egg case this is called the (ootheca) the eggs are developed inside the female.

The egg case can hold between 12-40 eggs this is mainly dependant on the species of cockroach. The egg case can be either dropped or at times glued to different surfaces. The female may drop the egg case just before they are ready to hatch or even months before hatching.

Once the eggs have hatched the new Nymphs will live closely with the adults. Where there is a serious infestation of cockroaches there is usually also a very musty smell.

The development stage of the Nymphs can take between 2-4 months and in this time a number of moults may take place. A moult is when the cockroach sheds their exoskeleton.

The smaller cockroach species tend to have a shorter developmental stage whereas other species may take a year or more.

The lifespan of an adult cockroach can be as short as a few months or over a year again this will greatly depend on the species and the environment.

During the life of a female cockroach they can produce between 5-30 egg cases (oothecae) this again depends on the species and the condition they inhabit. 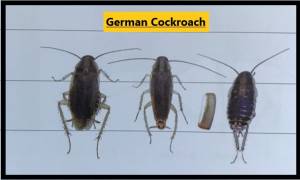 In most cases, an infestation of a pest such as a cockroach can occur around or inside a building that has a good food source.

Another contributing factor in the development of a cockroach problem is shelter and good hiding places. They like to stay out of the way during the day and scavenge for food during the dark hours.

Cockroaches do also like to shelter in areas that provide the right temperature and adequate humidity.

The kitchen in a home is an ideal place for them to harbour and even more so in a commercial kitchen.

Cockroaches can be carried from one place to another as live adults or Nymphs or as egg cases. They can be transported in baggage, food boxes, furniture, food, trains, buses, planes and ships.

This species is light amber-brown in colour with 2 darkish longitudinal stripes on its pronotum. Blattella germanica are between 12-15mm in size and they will infest the interior of buildings. They are mostly found in and around kitchens, storerooms, in both residential and commercial premises. They like to be close to a food source, moisture and warmth and they don’t fly.

This species is reddish-brown they have paler legs and a pale yellow border around the pronotum. They are between 35-40mm in size. This species can be found in sub-floor areas of dwellings, sewers, grease traps and wall voids. They are found in both residential and commercial premises and they can fly during the warmer months.

This cockroach is a brown colour with a much defined yellow border around the pronotum. They vary in size from 30-35mm. This cockroach is similar to the smoky brown in its harbouring habits it mostly found outside. They can also be found in sub-floors, garages and sheds. They may fly during the warmer weather.

The brown-banded cockroach is pale brown and has pale bands across the thorax and abdomen.  The female has a reduced wing whereas the male is fully winged. They vary in size from 10-14mm. This is an indoor cockroach they very commonly infest houses or commercial buildings where food is plenty. They prefer a drier environment so are sometimes found in bookcases, wardrobes, picture frames and even light fittings. This species of cockroach can infest throughout an entire building. They are known to fly during warmer months and if disturbed.

This species is dark brown to black in appearance and their wings cover most of the abdomen. The range in size from 20-25mm and they are mainly found in cooler environments. They have been found in cellars and sub-floors of buildings where the air is damp. This species of cockroach does not fly at all.

Where a cockroach infestation has taken place it’s best to seek the expertise of a professional pest control company to bring it under control.

Some species have developed immunity to certain chemicals so it’s important your pest controller has a good understanding of the different species.

A professional pest treatment will come with a full 12-month service warranty for peace of mind for the client.

The best way to keep your home or office free of cockroaches is to have a regular 12-month pest control treatment carried out.

In the case of cockroaches, prevention is better than cure.