A professional Brisbane termite inspection could save a homeowner thousands of dollars in termite damage if done every 12-months.

Termites are an obvious problem for homeowners; homes need to have an annual termite inspection to help identify any problems within the home and its surrounding gardens.

There are woods out there that termites don’t like, and if you’re lucky enough to have a home built from one of them then you’re going to be better positioned in the fight against termites.

I recently did a Brisbane termite inspection for a couple living in the suburb of Carindale, they were concerned about termites because their neighbour had recently had some in their back garden.

As with all termite inspections we start and finish outside looking around the garden and surrounds of the property, termites always start their attack from outside, so this is a pretty good place to start looking.

Shortly after starting the inspection I made my way into the roof void, this is a must area to inspection for termites during a Brisbane termite inspection, once up there I noticed that the property was built from cypress. 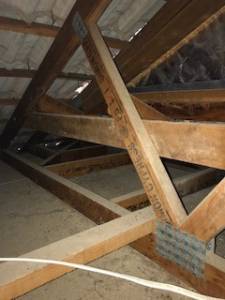 Cypress is a well-known termite resistant wood that many homes around Brisbane have been built from, but this doesn’t mean you get off scot-free.

There are other timbers throughout a home that termites will attack; these are in the form of skirting boards, architraves, doors, so an inspection is still necessary.

Here is a list of Native Australian softwoods resistant to termites:

There are plenty of other termite resistant woods that are imported into Australia and used in the building industry.

Another more commonly used wood is treated pine, this is well used throughout buildings in the many suburbs of Brisbane, but there are a lot of pitfalls with this type of wood.

Many are under the impression that a house built from treated pine is safe from any termite attack, this is not the case, only the outer surface is treated and once the ends are cut, the wood is then susceptible to termites.

Many people also presume that if a house is made of hardwood then it is safe from termites, but again this is not the case, termites do eat hardwoods.

Hardwoods will take some termite species a bit longer to work through, but they will still eat it, especially if that’s all that’s on offer, don’t be fooled into thinking your home is safe because it’s constructed out of hardwood, it will still need a regular Brisbane termite inspection carried out.

Here is a list of some of the Australian Hardwoods resistant to termites:

There are plenty more Australian hardwoods but the ones listed are the most well-known.

The Best Defence Against Termites

I’ve spoken to many customers over the years and also written many blogs about termites and the damage they can cause to a home, but the best defence against termite attack is to have a yearly termite inspection done.

I say this over and over; the reason being is it’s the most proactive step a homeowner can take to protect their home from being eaten by termites.

If an inspection is done thoroughly your termite inspector should pick up the first signs of termites, giving you plenty of time to take action, because once they make their way inside the cost of eradicating them can skyrocket.

When it comes to termites be proactive, strike them before they strike you, it’s a lot easier to stop them than it is to deal with the aftermath of a termite invasion of a home, and the damage bill can run into thousands of dollars, don’t leave it until it’s too late. 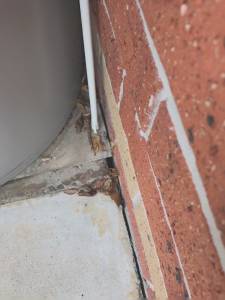 Barrier treatments are designed to help stop termites from attacking a home, they come in a few different forms.

The most well-known barrier treatment is a soil barrier, this is where a trench is dug around the edge of the property and filled with a suitable Termicide, and where there is concrete holes are drilled and injected.

Another form of termite barrier is a bait station system; this involves placing termite stations around the perimeter of the house.

Placed inside the stations is a termite bait in the form of a solid rod, the active ingredient is (Hexaflumuron) any termites within close proximity to a home with this system in place are attracted to the baits.

Once the termites have found the baits they start to eat it and take it back to the main colony, over the period of a few weeks this will kill the entire colony, eliminating the danger to the home. 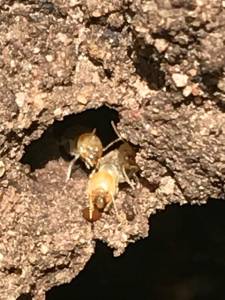 This is when a series of hoses with small holes in them is laid around the perimeter of the house; once the hoses have been fully installed it is filled with a Termicide.

The chemical will weep out of the small holes in the hose and then seep into the ground, hopefully contaminating the soil around the home.

The hoses are laid just under the soil surface, the problem with this system is once it’s laid you really don’t know what condition the pipes are in a few years down the track, there’s no guarantee that a re-fill is going to give a 100% protection zone around the property.

The best way to choose the right termite barrier system to protect your home is to listen to the advice of your local professional pest controller.

The one thing I can tell you as I do all of my customers is there’s no silver bullet when it comes to termites, and as I’ve mentioned earlier in this blog prevention is better than cure.

Get a regular Brisbane termite inspection done as this is the very best way to help keep your home termite free.