There are many different termites found in Brisbane and there are 5 that are of real concern for homeowners.  Below is a list of the most destructive ones commonly found in homes in Brisbane?

There are many different species in each Genus so it can get a bit confusing so I will try and keep this in layman terms. We will start with the most destructive and work our way down, but not forgetting all termites have the ability to cause serious damage.

The most important thing a homeowner can do to prevent termites is to have regular termite inspections carried out. This along with a professional termite barrier is the best way to keep your home free of these unwelcome pests.

When you have an inspection completed, make sure you read the report. The report will give advice on things that need to be addressed around the home. That good old saying, “Prevention is better than cure” could not be truer when it comes to these destructive pests.

The first two in this list are the worst and most destructive termites they have the ability to cause serious damage.

This species is found throughout Australia and is a common termite found in Brisbane homes. These are the most destructive termites in Brisbane and can cause a huge amount of damage in a short time.

The soldier has a pear-shaped head and is between 3.5mm and 6.5mm in length. When they are disturbed they produce a white material from a pore in front of the head. This is to help ward off potential enemies. 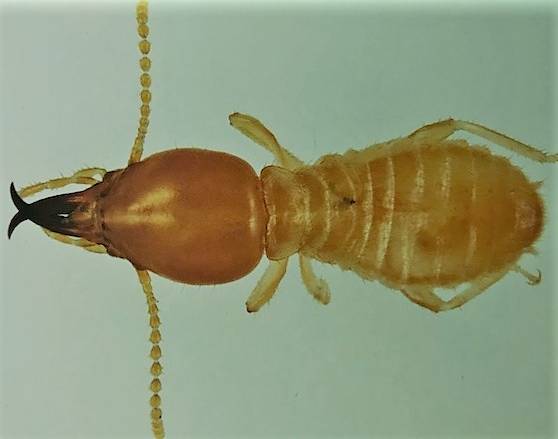 This is the most destructive termite in this Genus and is responsible for thousands of dollars in damage to homes throughout Brisbane.

C. acinaciformis doesn’t build mound nests in Brisbane but does further north. They build nests in many different places including tree stumps and living trees, under patios, and inside wall cavities in houses.

The pepper tree (Schinus areira) and the English oak (Quercus robur) are their favoured place to build a colony. Nests can be found in the root crown of the tree or even up to 3 meters high inside the main trunk.

With this species, it’s common for them to attack homes up to 50 Metres away from the main nest. This is why an inspection should always include the entire garden, not just the home.

They achieve this range by use of underground tunnels made by the foraging workers. This makes them a true subterranean termite. Coptotermes needs contact with the ground for its survival.  Although it has been found on board wooden barges and in this case gets its moisture from the moisture content of the wood. This is not a termite you want to find in your home and it lives up to its reputation of being one of the most destructive termites in not only Brisbane but Australia.

This species is found from northern Queensland to South Australia and is mainly a forest pest. It can be found nesting in trees and has also been known to attack buildings in the southern state of Australia.

It doesn’t have anywhere near the destructive potential as that of C. acinaciformis it’s more powerful relative. The soldiers vary in size between 4.0mm and 5.2mm. This species is very timid and is easily disturbed; they can also have very large colonies.

It can be found nesting in the root crown and lower trunks of living trees it also make subterranean tunnels and mud shelter tube above ground over different surfaces.

This species is the most commonly found termite in Brisbane homes and is one of the most destructive termites second to Coptotermes. It is very easy to identify this termite because it has two soldiers a minor and a major. Both soldiers are very different in appearance as shown in the picture below.

There are several different species in this Genus that are found throughout Australia.  They cause a lot of damage to homes and are the second most destructive termites in Brisbane.

The soldiers range in size from 5.6mm for the major and 3.6mm for the minor and these sizes vary by 0.6mm either way.  The heads of the two soldiers are very different and this is how they are identified.

This species doesn’t produce a white material from its head like that of Coptotermes.

They nest in trees under patios and tree stumps; they are commonly found under the foundations of fireplaces. The nest can be very large consisting of hundreds of thousands of home eating monsters. When only minor soldiers are found in a nest it’s an indication of a weak or young colony.

If there are major soldiers present this means the nest is very large and has the potential to cause a huge amount of damage to a home.

This species can also be found under damp mulch with no solid mud tunnels. This is a reason why termite inspectors recommend removing mulch from around homes.

The homeowner is usually the one to find this termite while vacuuming usually from bumping a skirting board. They will eat right down to the paint giving no sign of damage.

It can be very difficult to estimate the extent of damage to a building when this termite is found. A very thorough inspection of the entire building is required.

This termite will run away when disturbed and this can make eliminating them very hard. If Schedorhinotermes is found it is very important not to disturb it too much. To correctly remove this termite the workings are an important part of the process.

This termite is often found attacking fences, posts, poles and fence palings, and has also been known to damage flooring of houses. When damage to the flooring of decks is found it’s usually because of weathered conditions causing moisture.

Decking and fencing is a preferred feeding site for Heterotermes spp. They are found throughout Brisbane but are not serious pests as the conditions need to be right for them to attack timber in service.

The damage caused by this termite is usually superficial and they don’t range far from their small colonies.

The soldiers are 4.75mm long give or take 0.2mm they have very long cylindrical heads. They also have very dark and noticeable mandibles. The soldiers and the workers both have the same long slender looking bodies.

Both the workers and soldiers move relatively slowly and the soldiers are nowhere near as aggressive as other species of termite.

Heterotermes ferox doesn’t build mounds and it doesn’t have extensive galleries like other species. The workings are very fragile and when broken up the damaged surface has a mottled look.

The control of this species is very easy and usually doesn’t require the need for a termite barrier treatment. Once the colony has been located it can be easily sprayed with an appropriate termiticide. 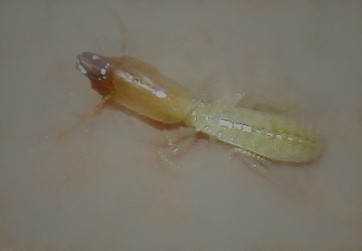 This termite is often encountered by pest inspectors and is found all over Brisbane and many parts of Australia. The soldiers are 4.40mm plus or minus 1.0 mm and they build arboreal nests.

Their nests can be found on fence posts, poles, mounds on the ground and they even build them underground. One way to quickly identify this destructive termite is by the paler colour of its workings.

This species has long mandibles and when viewed from the side they don’t curve, their heads have very straight sides. These are some of the characteristics in which a termite inspector identifies each of the many different termites.

This is a relatively easy termite to destroy and is dealt with in the same way as that of Heterotermes. 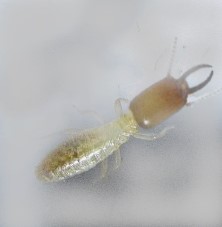 This species is a multi-site nester and can be easily identified by its nasute head that tapers to a long snout.  The soldiers are smaller than workers and somewhat more fragile. The workers are more heavily built than the soldiers. The soldiers also have a couple of dark areas on the top of the head and the colonies house the Queen, king, soldiers, workers, and reproductives.

This particular species can be found in southern Queensland through to New South Wales. They build mounds on the ground but not in drier regions, as the climate gets drier they prefer to nests in tree stumps and below ground.

Quite often the earth above the nest site is left bare this is a characteristic of this species. N. exitiosus is a very destructive termite and is capable of severely damaging hardwood timbers. It will attack wood that is in ground contact and timber in service.

This termite species is known for building nests underneath houses in the sub-floor area and unless these areas are regularly checked their colonies can go unnoticed and grow in size until the flooring gives way and collapses.

Bridges made from wood, poles and fences are often seriously damaged by this particular species. The mounds of N. exitiosus are usually of a dome shape and around, 30 to 75 cm. The diameter of the mound can be between 30-120cm.

This species will attack decayed wood that is in contact with the ground. If decay has formed in timber floors in a building this termite will damage the wood. The decayed wood is often the cause of the attack due mostly to poor ventilation. Once the flooring has been attacked it usually will need replacing.

Verandah decking is another favoured feeding site again due to the timber being moist and weathered. This termite doesn’t attack sound well-ventilated timbers, this is a reason sub-floors should be kept well ventilated. Their colonies are quite small and the soldiers are between 3.25mm to 3.75mm in length. 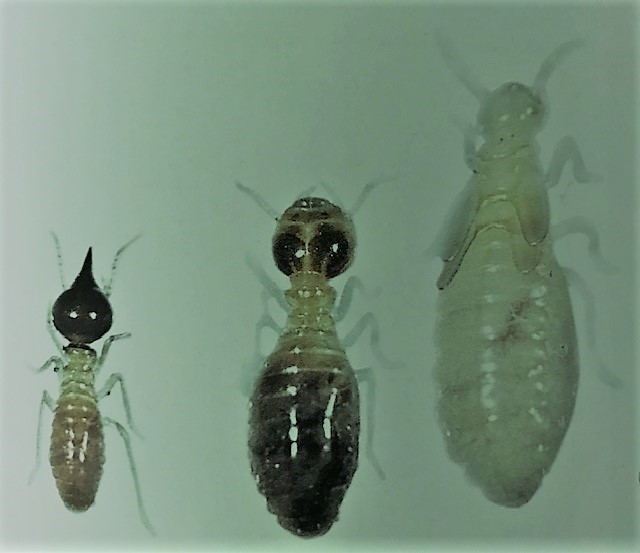 This species has the biggest soldiers ranging from 5mm to 7mm. It can be found in coastal bushland ranging from Sydney to Cairns; it builds it very characteristic arboreal nests in the folks of trees.

The colony can be found in the root crown of trees where there is either decay or some fire damage. Once their colonies have become more established their numbers increase and then they build the arboreal nests higher up the tree.

Even with the nest being higher up the tree they still maintain soil contact by making extensive mud tunnels down the tree trunk. The outer part of their nest is soft and friable this is easily broken and damaged.

The arboreal part of the nest on the outside of the tree is generally connected to other parts of the colony in the root crown of the tree.  Their shelter tubes are easy to see and they are a dark brown to black and can be seen on the outer part of the trunk.

This species has large nests that can be very populous. Their subterranean tunnels that are just below the ground extending from the base of the tree to different food sources.

This species can certainly damage timber in buildings, but when an attack happens it’s usually down to decaying wood and with high moisture content.  In most case, the damage caused by this termite is to fences, poles and wood that is direct contact with the ground.

So as you now see there are many different termites that can do major damage to our homes. But with a professional inspection carried out each year you are less likely to ever have an issue.

Don’t let your home become under attack by termites get a professional pest inspection carried out by a trained and licensed technician. 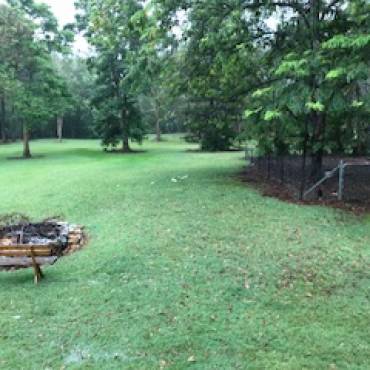 Pest Control In The Rain