Bedbugs Advice From The Experts

Don’t let the bedbugs bite; that’s the saying we’ve all heard plenty of times, and when bedbugs do get biting, they can cause severe skin irritation bringing the victim out in welts that can take some time to heals.

I’ve done plenty of bedbug jobs over the last 20 years of being in the pest control industry. Here at sunnystate pest control and termites, we cover the whole of Brisbane, Ipswich and parts of the Gold Coast, and these areas have their share of these little biting insect.

Treating them is only for experienced pest controllers, as a comprehensive inspection and treatment of the premises is required, no stone can go unturned, or in the case of bedbugs; no mattress can go unturned.

The mattress is the favoured harbouring place for bedbugs, as they need to be very close to the host, but that being said, the bed isn’t the only place they are found. We’ll have a look at where they come from; where they hide; what they feed on and how to get rid of bedbugs. So let’s get started and take a more in-depth look at the dark world of the “Bedbug.” 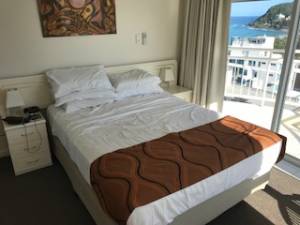 Where Do Bedbugs Come From

Some say bedbugs were initially found in caves in the Middle East, with large quantities of bats, and also where humans found refuge. From here they have been passed around the world through various modes of transport.

So to answer the question of where do bedbugs come from, these days it’s from humans that come in contact with them, mostly from staying in a room that has an infestation, and in many cases, the new host won’t even know they are transporting them around from place to place.

As we have developed faster ways of getting around the world, so have the bedbugs, they may hitch a ride in our suitcase on our clothing etc. One very prominent source of bedbug infestation and transportation is through backpackers.

Over the years backpacking has become one of the big-ticket items to do for young people before they decide to settle down and get into a career. I did a little bit of backpacking myself when I was 24, and great fun it was too, but I’m glad to say I never had any issues with bedbugs; Thankfully.

So if they did originate in the middle east, “and who knows if that’s true or not” the one thing I do know is they are now pretty much all over the world and can infest most dwelling, especially homes hotels and motels.

They do prefer a warmer climate to breed and harbour in, and we find the time of year we get the most amount of enquiries about bedbugs is during the summer where the temperature stays warmer during the day and night. That being said where a severe infestation occurs, they can still be found during our colder months, especially now as buildings are heated providing an ideal environment.

Some associate bedbugs with poor hygiene, and although that may be the case in some situations, they can still be found in the cleanest of room 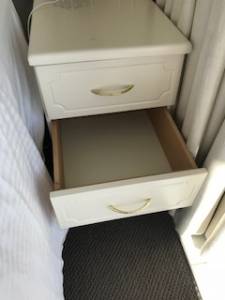 s, I’ve personally treated many hotels with bedbugs, and the rooms and standard of cleanliness are second to none. So it’s not always down to poor hygiene.

Bedbugs go through what is known as a gradual metamorphosis, so it starts out as an Egg, Nymph, Nymph, and Adult. The female needs protein before being able to lay eggs; they lay their eggs in cracks and crevices close to where the host is.

The mattress is a desired location for bedbugs to lay their eggs and harbour, but they have also been found in other areas such as skirting boards, lounge suits or even behind pictures.

The eggs hatch within 7 to 30 days, once the eggs have hatched the nymphs require a blood meal to survive, they go through around five moults before they become an adult, and will need a blood meal each time they have a moult.

The females can lay around 500 eggs during their life, a bedbugs life cycle is about 45 days, but in particular, conditions that are less favourable for them it can be as long as a year. 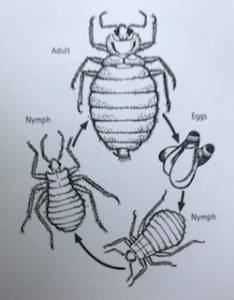 All stages of a bed bug’s life cycle whether female or male will require blood to survive. They get their blood meal from sucking the blood from their host (You; me; or humans in other words).

As mentioned earlier they like to remain in proximity to where they find the easiest blood meal. The higher a person’s body temperature, the more likely they are to be bitten.

It is quite normal for a couple sharing a bed for only one of them to get bitten; I have been to plenty of jobs where this situation has happened.

Bedbugs come out in the early hours of the morning, to suck the blood of their host, and once they have had a sufficient blood meal, they will then return to the relative safety of their hiding place.

They are often found in a small group; or in the case of an infestation a large group, humans are their natural target, but they have been known to feed on bats, cats or any other animal they can sink their piercing mouthparts into.

Adult bedbugs range between 4 and 5 mm and are of a reddish brown colour, they don’t have any wings, and their body is an oval shape.

They have a flattened shape for a body, and they have piercing and sucking mouthparts, they use these very carefully to extract blood from their host in the early hours of the night, without them even knowing.

Some customer will call us up saying they think they have bedbugs; they say they are getting bitten all over the body; which is a sign of bedbugs; they may also tell; that they have seen some tiny black dots that you need a magnifying glass to see. In the case of bedbugs, you will very quickly see them without the aid of a magnifying glass, even when they are in the nymph stage of their life cycle.

Bedbugs tend to huddle altogether and are very easily spotted; they are often found in the joins of a mattress. A tell-tale sign that you have bedbugs is by checking the sheets on the bed. When they bite; the marks will leave blood spots on the sheets, very easily seen with white bed sheets. 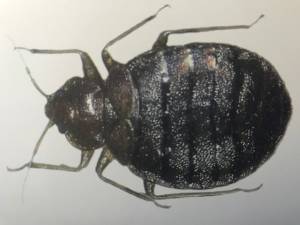 How To Get Rid Of Bedbugs

Ok so this is the part everyone wants to know, how to get rid of bedbugs, well I can tell you after 20 years of dealing with these little bloodsuckers, it can take a couple of treatments, just depending on how big of a problem there is.

The first thing that needs to be done is a thorough inspection of the property and taking extra care, especially in bedrooms where they are known to be.

During an inspection there will be signs of them somewhere in close proximity to the bed, it could be in the mattress usually around the edges of mattresses, or the bed frame itself, these are the most likely places where a pest control technician would start looking first.

Other areas to look would be in bedside cupboards, skirting boards where there are cracks, and as mentioned earlier behind pictures or seating.

Once identification has been made a treatment can then start. So all bed sheets would have to be removed and either cleaned in a wash under high temperature, or placed into a black plastic bag, and left out in the sun for a day, this will kill anything inside, most prefer to do the latter as it saves doing a mountain of washing.

Using an insecticide; there are a couple of products that can be used, a professional pest control company would use a liquid spray, dispensed with a pressurised sprayer. Another method is to use a dusting treatment; these are very effective against bedbugs, and excellent for applying into hard to reach areas.

Another method is the use of an aerosol can, not the ones you buy from the local shops, these are specifically for treating biting insect such as bedbugs, and the active ingredient is Sumithrin a Pyrethroid; a powerful organic compound.

A very effective way to treat bed bugs is using heat. The room to be teated will have to be heated to 50degees celsius and kept thee for about one hour.

In severe infestations, a bed bugs heat treatment followed with chemical treatment is the best option. Heat kills bed bug adults, nymphs and their eggs by drying them out, the process literally cooks them.

Not many pest control companies have the equipment to carry out a successful heat treatment. So find a company that does this can be a challenge but the instant results you get from a heat treatment are well worth it.

All areas of the affected rooms are to be treated, the mattress and the bed frame all have to be sprayed along with all skirting boards, and any hard to reach areas will need a dust applied, the best dust for treating bedbugs is permethrin, this is applied using a fine dusting tools, it emits very small quantities at a time, leaving a fine layer over the treated surface.

Once the treatment has been done, it’s safe for the homeowners to sleep in the treated rooms again; all the products used are safe for family and pets if applied correctly.

The success of a bedbug’s treatment will depend on the experience of the pest control technician called in to help eliminate them. It’s important they have a good understanding of where they harbour for a treatment to be successful.

Getting rid of bed bugs is a specialist job and using the services of a professional bed bugs pest control company is the safest way to treat them. Once a problem with bed bugs has started it’s best to get a treatment underway as soon as possible. The longer a problem goes untreated the harder the job becomes.

If you have a problem with bedbugs and need some advice, don’t hesitate to contact us at www.sunnystate.com.au Pest Control & Termites, by either email or phone.